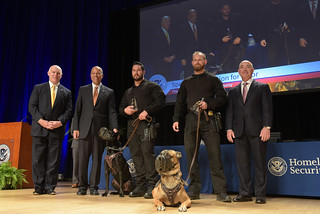 On November 3, 2015 the U.S. Department of Homeland Security presented two dogs and their handlers with a Special Award for Valor for responding to, and thwarting, a fence-jumping attempt around the perimeter of the White House in October 2014.

Secretary of the DHS, Hon Jeh Johnson, said the dogs demonstrated selflessness, bravery, and tactical proficiency and professionalism while performing their duties.